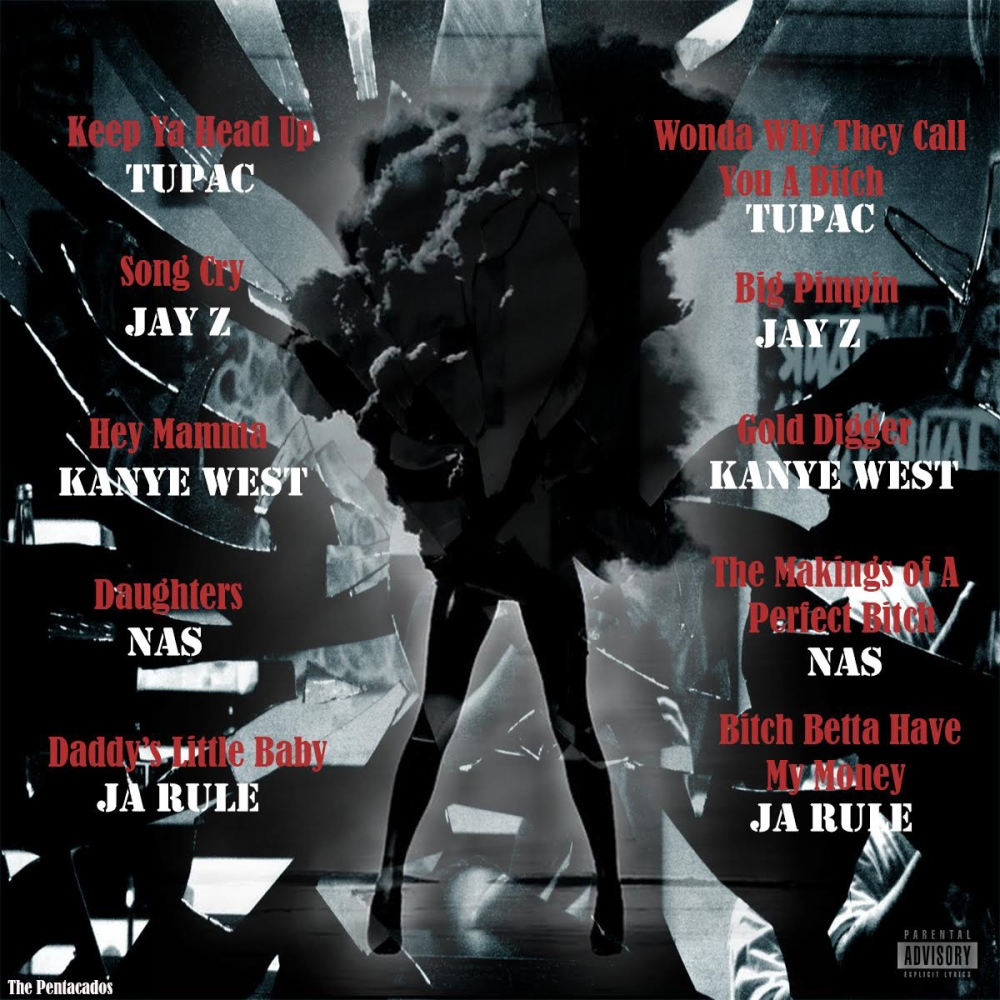 This record was curated as a lyrical exploration of the depiction of women in hip-hop. From its conception, hip-hop music has been a largely male-dominated field, with the presence of female rappers seeming to diminish over time. Has popular hip-hop created or reflected an environment unwelcoming to women by a normalized subjection to toxic masculinity? How much variation exists within hip-hop in regards to the attitudes expressed towards females in popular songs? Is there much effort to change a rampantly negative and hyper-sexualized narrative by rappers often dubbed “conscious”?

This project seeks to answer these questions, and in short; no, not all hip-hop music resorts to the same demeaning and unwelcoming narrative towards female complexity, but we found that much of the time, the songs that attempt to construe a more positive and respectful message towards women is often nuanced by stark contradictions within the artist’s’ own musical catalogues.

In realizing this, we decided to illuminate this “duplicity” that frequents some of the largest names in hip-hop, choosing to feature Tupac Shakur, Jay Z, Kanye West, Nas, and Ja Rule. On side A of our record, we have five songs from these artists that all express positive affirmations of respectability towards women and sensitivity in their own emotional reflection. Side B of the record, however, highlights another song from each of those artists that represent the opposite narrative, consisting of blatantly stated messages of disrespect and hyper-sexualization, while reducing their own emotional orientations to a rigid masculinity.

We worked to ensure that the record sleeve artwork portrays this duplicity as well. The front cover shows a man with his head lying low and a drink in his hand, depicting the conflicting internal dialogue in regard to his orientation towards his own emotions and his perceptions towards women, confused by the contradictions of his actions. The back cover of the sleeve plays on the idea of duality and ambiguity. The objectification of women, met with inconsistent messages of respect, is signified by the explosion of her body, symbolizing the loss of identity and intense subjectification a woman may feel in the unwelcoming environment of hip-hop music. Hip-hop is often described as a reflection of the artist’s reality, hence why the mirror in the background of both the front and back are shattered; this record is, in essence, a contradicting reflection.

Back in 1995, in an interview with the LA times, Tupac asked, “Who was writing about Black women before Keep Ya Head Up?” That hype is not unfounded. Tupac’s 1993 hit, Keep Ya Head Up, is heralded still today as a feminist anthem. The song highlights violence in his community against women, the rampant disrespect and attempts to control women’s sexual and reproductive choices, and the racism that disproportionately affects Black women. It’s a heavy song, riddled with self-reflective questions aimed to usher in an often absent respect and appreciation for women from men. In our opinion, it’s a true prototype of a narrative-changing song. But how contradicting and how confusing is it, then, for Tupac to release a song three years later, entitled, Wonda Why They Call U Bitch.

As a response to allegations about “gangster rap” being responsible for the violence within communities of color from Delores Tucker, an African-American politician and civil rights activist, Tupac released this searing song. In it, he can be heard expressing messages completely opposite of those he seemed to champion in Keep Ya Head Up. “I give a holla to my sisters on welfare,” Tupac says in Keep Ya Head Up, reflecting on the unjust conditions in which so many women of color grow up to need welfare-assistance to get by. Yet, in Wonda Why They Call U Bitch, he can be heard completely back-stepping and accusing Tucker of taking advantage of her welfare by spending it on going to the clubs to search for sex and a rich man. The swindling of welfare-money is a dangerously racist trope, i.e. the “Welfare Queen,” rooted in the conservative party expressed to delegitimize the social service and restrict people from receiving any government assistance. Further, Tupac engages in a popular process of “slut-shaming,” or demeaning judgment towards women for her sexual promiscuity, even accusing her of using sex to further her career, implying she couldn’t do so without it. These expressions stand in such deep contrast to those messages purported in Keep Ya Head Up.

The rest of this record follows this same pattern and continues throughout to illuminate these contradictions in rappers’ depiction of women. All of them seem to take on this face of duplicity, where in they can be found to uphold doubled depictions of women in their lyrics. When put side by side, these artists face their own inconsistencies and their own contradictions.

Keep Ya Head Up – Tupac

Wonda Why They Call You A Bitch – Tupac

The Makings of A Perfect Bitch – Nas